Advance and Secure (in short, AAS - sometimes incorrectly called "Assault and Secure") is the primary game mode in Squad.

The objective of Advance and Secure is to capture and hold Control Points (also referred to as flags) in a preset order. Capturing enemy flags penalizes the enemy team and rewards you with added Tickets. The team who runs out of tickets first will lose. 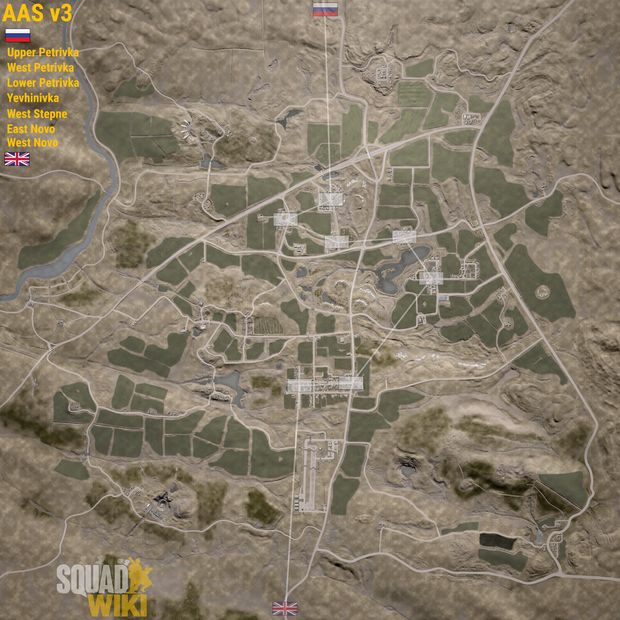 There is also a variation of this game mode called "Parallel Advance and Secure" (PAAS). In PAAS there is not just a single line of Control Points but multiple separate parallel such lines. Each of these lines need to be captured on their own.

Two teams will start from opposite ends of the map in their main base, or in certain circumstance a limited forward spawn area. The teams objective is to capture and hold Control Points from the enemy team. Control Points can only be captured a specific order that will appear on the map

Your team cannot capture a Control Point out of order, your team will need to capture and hold the previous flag. This is indicated by the Attack and Defense markers that appear over Control Points on your map. If both teams neutralize two opposing flags in the CP's line of sequence, it's a stalemate - neither team can take their next attack flag. Only after the defense flag has been re-captured, can the attack flag be captured next.

As each team starts to cap neutral flags, it's not possible by enemies to block this capping process. For example: if one soldier is in the capture zone of their team's first flag and nine enemies are in that cap zone as well trying to block it, the flag will still be captured. Once they find him and kill him, the flag will (obviously) stop capping. This should severely reduce the "Rush Flags" meta, and shift the focus more towards the linear progression of moving from flag area to flag area, as well as having a proper supply train with FOBs and logistics. Blocking a flag is technically still possible if you eliminate the entire attacking force, but it will require more resources to do and is more likely to fail.

The team who runs out of tickets first loses. Therefore assets and FOB`s play a big role in the ticketcount of a team as well. Knowledge about the value of those assets can help you in correctly analyzing the situation of a team. Securing a flag while losing a lot of assets can actually harm your teams effort in winning a round.

Furthermore, keep in mind that individual scores do not affect the result of the match. 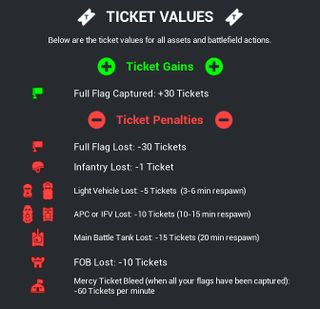 ] for capturing neutral Flags that have not been owned previously. (ie: start of game)

] for capturing Flags that belongs to the enemy.

] when the enemy captures Flags that belong to you.

] for losing a Forward Operating Base (FOB; "Radio").

] by Infantry lost (bleed out).