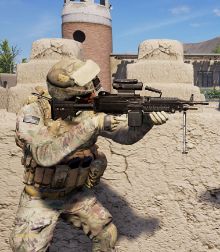 US Army Automatic Rifleman with a M249 SAW with Red Dot sight.

The Automatic Rifleman is one of the kits available in Squad. Each faction has their own version, equipped with a standard weapon common to its army.

The Automatic Rifleman carries great responsibility, providing cover fire for their squad while on the move or during an engagement. Their primary weapon has the largest magazine capacity of anyone in their squad, and they are often called upon to use this to their squad's advantage. It is considered one of the most important and influential roles on the battlefield. Anyone who occupies it should always work in tandem with their Squad Leader for maximum effectiveness.

Depending on the faction, a variety of Automatic Rifleman classes are available. It is equipped with a shovel, one hand-grenade, smoke grenades, and two field dressings. Resupply costs 50 ammo points.