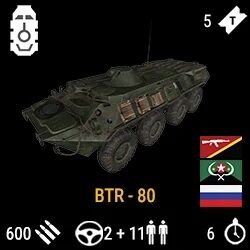 The BTR-80 is an 8-wheeled APC or infantry carrier. It was designed by the Soviet Ministry of Automobile and Agricultural Machinery in 1984. The BTR-80 was adopted by the Soviet Army two years later as their standard APC, replacing the BTR-70, and remained in service until 1991, when the Soviet Army dissolved. The Soviet Army's successor, the RGF, continued using the BTR-80 as the standard APC and ICV. The BTR-80 remained in service until 2013, when it got replaced by a more modern variant, the BTR-82A. All BTR-80s that were in service in the RGF were later upgraded to that of the BTR-82A configuration and the new variant was named the BTR-82AM. The BTR-80 is still used by many countries and non-state organizations, mainly due to their connections to the Soviet Union in their past.

The BTR-80 is used by two factions, the RGF and the Irregular Militia.