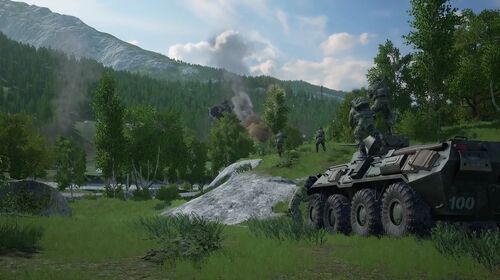 The Commander role is the only role that can exclusively deploy Strategic or Tactical Support Actions for reconnaissance or firepower purposes.

Commanders are chosen by a vote, in order to nominate yourself you must have 2 squad members and there must be at least 3 squads created. After one or more squad leaders nominate themselves every squad leader gets a chance to vote for a candidate. Upon being selected to become a commander the squad name will change to: "CMD SQUAD". Commanders can be re-elected after 300 seconds. If a new commander is elected the cool downs are reset.

Commanders deaths are worth 2 tickets instead of the usual 1.

The Commander is not available in the Skirmish game mode, Logar and Sumari due to their size.

Requirements for Support Usage depend on the team Faction. Each action and action type incur unique cooldown times after their deployment, and have an initial cooldown when the match starts.

Strategic support is used for reconnaissance and does not require a request from a Squad Leader.

Delivering a weaponized tactical support payload against the enemy is a 4 step process: 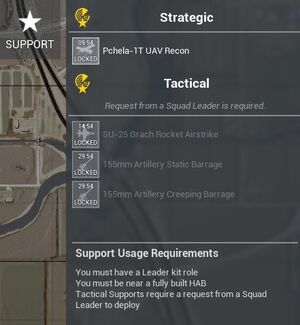 Tactical Support can only be delivered/deployed once Step. 4 is completed!

TACTICAL SUPPORT PAYLOADS FOR ANY FACTION ARE NOT 100% ACCURATE, SO BE WARY OF FRIENDLY FIRE!!!

In order to complete Step. 4, the conventional Commander must be near (roughly 30m) a friendly fully-built HAB.

When deploying a static artillery barrage, all barrages will land inside the circle radius, while a creeping artillery barrage will cause the barrages to follow a direction. Both radius and direction length are specified by the Commander. Conventional artillery barrages are accurate, however they require 2 "ranging" shots before the main barrage starts.

The airstrike actions will follow the vector/line defined by the commander.

In order to complete Step. 4, the unconventional Commander must be near (roughly 30m) a friendly fully-built HAB or a friendly vehicle.

The Heavy Mortar Barrage fires a rapid succession of mortars in an area defined by the Commander. Heavy mortars are less accurate and have less splash damage than the 155mm Artillery Barrage, but fire more rounds and do not require ranging shots.

The Handheld drone is a small handheld drone that can be used to fly around the map to get a better overview of the fight. The drone is limited by a maximum altitude and has a 10-minute battery life.