Destruction is a game mode in Squad introduced in Alpha 13. Maps known to have a destruction layer are currently Fool’s Road, Gorodok, Narva, and Yehorivka. 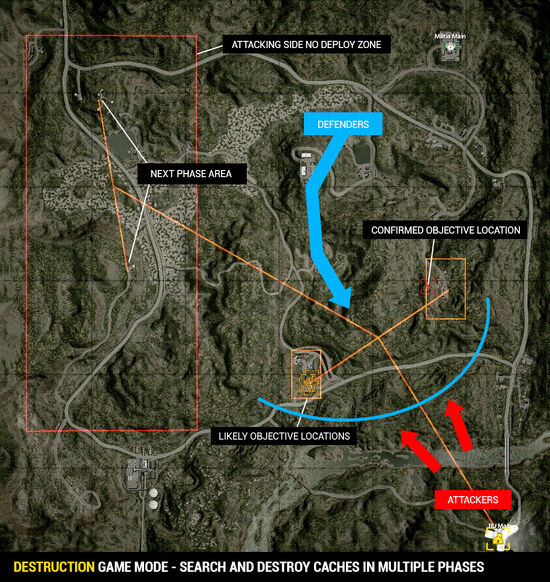 In the Destruction game mode, the attacking team must destroy multiple caches before they run out of tickets or the timer runs out. Attackers start out with 200 tickets and defenders start with 1000 tickets. Layers have either 2 or 3 phases and each phase has two zones, each of which has a cache. Attackers must search both zones, denoted by Question Marks (?) on the map (see image on right). The Question Marks indicate a location where the randomized cache might be located. Once an infantryman enters this area, the Question Mark either disappears if the cache is not at that location or the marker will turn into a sword, indicating a confirmed cache location. Once a cache has been located, it must be destroyed by either the Combat Engineer's or Sapper's demolition charge. These charges explode in 30 seconds once placed. No other weapon or explosive can destroy the cache. When both caches of a phase are destroyed, the attacking team gets a 50 ticket bonus plus additional time. The defending team loses 10 tickets. When both caches of a phase are destroyed, a new phase begins. The next phase is on a three-minute delay to prevent rushing. Also, during this time the defending team is given temporary spawning locations at the new phase. Attackers win by completing all phases within the allocated time. Either team loses if they run out of tickets.