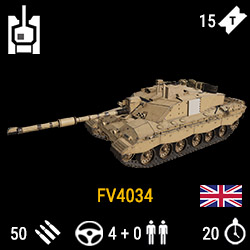 The FV4034 is a British main battle tank in service with the armies of the United Kingdom and Oman. The FV4034 is an extensive redesign of an earlier variant. Although the hull and automotive components seem similar, they are of a newer design and build than those of the earlier variant and only around 3% of components are interchangeable. A visual recognition feature is the armored housing for the TOGS thermal gunsight; the FV4034 has this above the gun barrel, the earlier variant has it at the right-hand side of the turret. The tank's drive system provides a 550 km range, with a maximum road speed of 59 km/h.

The FV4034 is equipped with a 120-millimeter (4.7 in) 55-caliber long L30A1 tank gun, the successor to the L11 gun used on the Chieftain and its earlier variant. Unique among NATO main battle tank armament, the L30A1 is rifled, because the British Army continues to place a premium on the use of High-explosive squash head (HESH) rounds in addition to armor-piercing fin-stabilized discarding-sabot rounds. The FV4034 is also armed with an L94A1 EX-34 7.62 mm chain gun and a 7.62 mm L37A2 (GPMG) machine gun. Fifty main armament rounds and 4,200 rounds of 7.62 mm ammunition are carried. The FV4034 has a four-man crew. The turret and hull are protected with second generation Chobham armor (also known as Dorchester).

The FV4034 is the main battle tank available to the British Army. It can hold a crew of four; a driver, gunner, commander, and a loader. The main cannon is a 120mm rifled gun that is capable of firing AP Sabot rounds, high-explosive rounds, or smoke rounds.