The FV432 is an armored personnel carrier (APC) in Squad. Adopted by the British Army in 1963, its primary purpose is carrying infantry around the map, and providing light fire support. 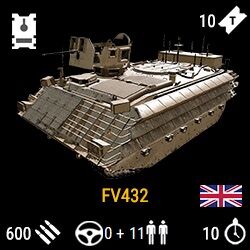 The FV432 was introduced in 1963 as the infantry carrier variant of the FV430 series of armored fighting vehicles. The FV432 became the most common variant, being purposed to transport infantry and later serving as fire support. Although it was planned for the FV432 to be replaced by the FV510, some of them were upgraded to modern standards in the British military while others became privately owned.

The FV432 is only used by the British Army.

Matchups with vehicles of comparable role are as follows:[edit | edit source]