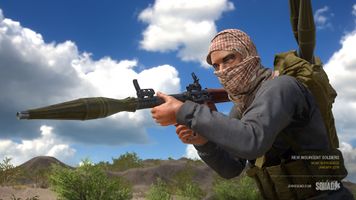 The Heavy Anti-Tank is the most effective anti-vehicle role in Squad, equipped with the most powerful and greatest number of rockets. Given the kit's greater firepower compared with the Light Anti-Tank, each team is limited to just two Heavy Anti-Tank kits. The primary Heavy Anti-Tank kit is unlocked when a team reaches 15 players and the secondary kit is unlocked when a team reaches 20 players. Each squad requires a minimum of three players in order to claim each kit. One squad can claim both kits, although allowing two squads to claim a kit is generally preferred. The Heavy Anti-Tank role falls under the Specialist role type, which is limited to two per team.