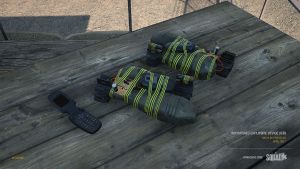 Two IEDs and the Phone Detonator

The Insurgent and Irregular Militia Sapper class has access to the IED.

A Sapper can have up to 5 IEDs on the map at any time. Placing a new one will remove the oldest from the world.

When you have placed an IED you can dig it further into the ground to help conceal it, or leave it in plain sight to attempt to spook and funnel enemies into your other explosives or ambushes. This also means that your enemies can dig them up and thus neutralize them.

Unlike the M112 C4, SZ-1, and 600g TNT block explosives, IEDs are remotely detonated. All Sappers are provided with a cellphone detonator which they can use to detonate all their active IEDs on the map. When the button is pressed, the phone on the IED will start ringing, and explode after the short ringtone. This ringtone can give away the IED's location, possibly allowing enemy infantry to disarm it before it explodes, or giving ample time for them and any nearby vehicles to escape the blast radius.