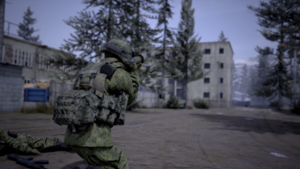 Russian Ground Forces Light Anti-Tank infantryman about to shoot a HEAT round at enemies in a building with the RPG-26.

Each faction offers two types of Light Anti-Tank kits; a primary and a secondary. Every squad is limited to one primary and one secondary kit, unlocked when a squad reaches three and six players respectively. Teams are restricted to four primary kits and four secondary kits total, unlocked when the team reaches six, twelve, eighteen, and twenty-four players total respectively. The Light Anti-Kit kit is considered a Fire Support role, which is restrcited to three per squad.

Given the increase in the number of Vehicles in Squad, including Main Battle Tanks, the ability to destroy or disable enemy vehicles is increasingly vital to the success of a team. On Maps (layers) with a large number of vehicles, as many Light Anti-Tank kits as possible should be claimed. A team that is not able to effectively deal with enemy vehicles often loses a match, given vehicles ability to ferry troops across the map, supply Forward Operating Bases, and provide massive fire support on the battlefield.