The M1126 is a fire support vehicle featured in Squad. The M1126 is the standard armored personnel carrier (APC) and infantry carrier vehicle (ICV) of the United States Army (US Army). The M1126 was the first fully armoured vehicle introduced to the US Army Faction, and combines good survivability and speed with a decent weapons platform. 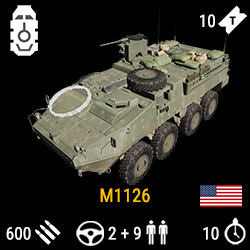 The M1126 is an 8-wheel APC and ICV. It is based off the Swiss Piranha III 8x8. The M1126 was later adopted into the US Army in 2002 as the standard APC and ICV alongside with the M113 APC. The M1126 is currently used by the United States and Peru. Chile, Colombia, and Iraq are currently interested in purchasing the vehicle.