The M2A3 is an Infantry Fighting Vehicle (IFV) added to Squad in update V11. It is operated by the US Army. 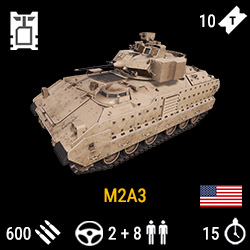 The M2A3 is a new Infantry Fighting Vehicle (IFV) for the US Army. Bridging the gap between Armored Personnel Carriers and Main Battle Tanks, IFVs are used by U.S. Army for reconnaissance and infantry transportation, providing them protection from small arms fire, while also providing firepower to both suppress and eliminate most threats to friendly infantry. It is designed to be highly maneuverable and to be fast enough to keep up with heavy armor during an advance.

The M2A3 is an amphibious tracked IFV. Designed in 1981 as a response to the Soviet (now Russian) BMP series, the M2A3 was to serve as an APC and a tank destroyer. The M2A3 was adopted by the US Army the same year it was designed and today, Saudi Arabia and Lebanon now use the vehicle as well. The M2A3 update was introduced in 2000.