The MT-LB is a Soviet Russian multi-purpose fully amphibious auxiliary armored tracked vehicle as well as an armored personnel carrier (APC) and infantry carrier vehicle (ICV). The MT-LB started out as the MT-L, which was designed by the Soviet Central Auto and Tractor Directorate in the late 1960s. A variant was created out of the MT-L by adding armor to it, creating the first MT-LB. The MT-LB was then adopted by the Soviet Army as the standard multi-purpose fully amphibious auxiliary armored tracked vehicle alongside with the BMP-1 (another Russian amphibious tracked APC) in the same year.

The MT-LB is used by the Middle Eastern Alliance and both rebel factions: the Insurgents and the Irregular Militia. It is a relatively cheap infantry transport vehicle, with basic armour and armament.

The Insurgent MT-LB variant uses a PKT machine gun as its armament which, although being much weaker than the NSVT machine gun of the Militia variant, can hold up 200 more rounds than the NSVT. The PKT is incapable of destroying armored vehicles with sustained fire. It is, however very reliable at providing suppressive fire towards enemy infantry due to how many rounds each magazine can hold. 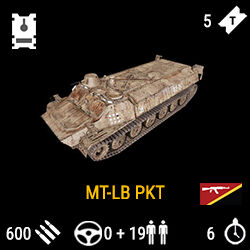 The variant shown below as portrayed in the game is the MT-LB VMK APC which replaces the turret mounted machine gun with a remotely operated NSVT heavy machine gun and entered service with Russia in 2011. They primarily use the vehicle as an armored personnel carrier in mountain brigades and in at least one naval infantry (arctic) brigade. An additional 1,600 rounds of 12.7mm ammunition can be transported between the benches in the troop compartment.[1]

The MT-LB VMK APC is used by the Russian Ground Forces, the MEA, and the Militia factions. It utilizes the NSVT heavy machine gun, which is excellent for dealing with infantry threats and can destroy Technicals, logistics and transport trucks, and other light vehicles with enough sustained fire. 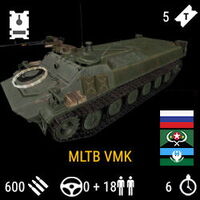 Armed with the ZU-23-2 anti-aircraft guns, this MT-LB can inflict harsh damage on approaching enemy aircraft as well as nearby infantrymen. This vehicle is available to both Insurgents and the Irregular Militia. Its secondary armament consists of a PKT general purpose machine gun for infantry suppression. The gunner is very exposed to enemy fire, so you should try and keep back from the front and attempt to engage enemy aircraft/infantry at range instead. 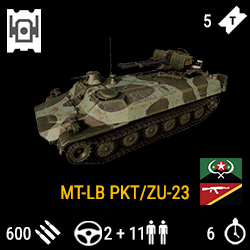