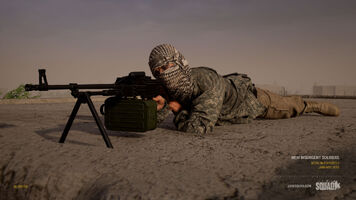 Insurgent machine gunner with the PKM

The Machine Gunner is one of the kits available in Squad. Each faction has their own version, equipped with a standard weapon common to its army.

The machine gunner's role is a somewhat specialized role in Squad. Unlike its lighter cousin, the automatic rifleman, the machine gunner is designed to provide suppressing fire at a longer range, with each general purpose machine gun (GPMG) featuring sights that zero beyond a kilometer. There is a limited amount of machine gunners per team, and a limit of two per team to emphasize their specialized purpose.