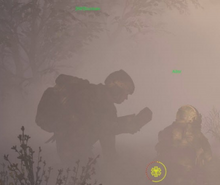 A US Army medic heals a fellow squad-mate.

The Medic is a command and support role whose primary responsibility is to look after his teammates' health during combat. It is available to all factions.

The Medic uses field dressings and a medical kit to bandage (or "patch") bleeding, revive incapacitated (or "downed"), and heal wounded teammates, saving his team from losing precious tickets. He can also bandage 25% faster than standard roles. For instructions on bandaging, reviving, and healing, see Health Management. As of Beta 20, Medics also revive teammates much faster than other roles.