The RPG-7 was designed by the Bazalt company in 1961 and later adopted by the Soviet Army in the same year. The weapon's simplicity, low cost, ruggedness, and efficiency made it one of the most popular anti-tank weapons in the world and it has been used from the Vietnam War to the present day. Its aforementioned ease of use and cheapness allowed it to be produced in enormous quantities and tens of thousands of them were purchased by dozens of countries across the globe. Today, two versions are created from the original design; the RPG-7V2, which is capable of firing standard and dual high-explosive anti-tank (HEAT) rounds and fragmentation rounds, and the RPG-7D3; the modern paratrooper version of the RPG-7.

The RPG-7V2 package adds the PGO-7 2.8x optic to the launcher, for both Russian Light Anti Tank and Heavy Anti Tank kits. This allows Russian anti-tank kits to better acquire targets and account for distance with the built-in projectile drop compensator reticle. This reticle accounts for all ammunition types. The left side of the compensator reticle is for acquiring targets with the OG-7V Fragmentation rocket and the PG-7V Heavy Anti Tank-Tank rocket up to a range of 500 meters, whereas the right side is for acquiring targets with the PG-7VR Tandem Heavy Anti-Tank rocket up to a distance of 200 meters.

How to use it[edit | edit source] 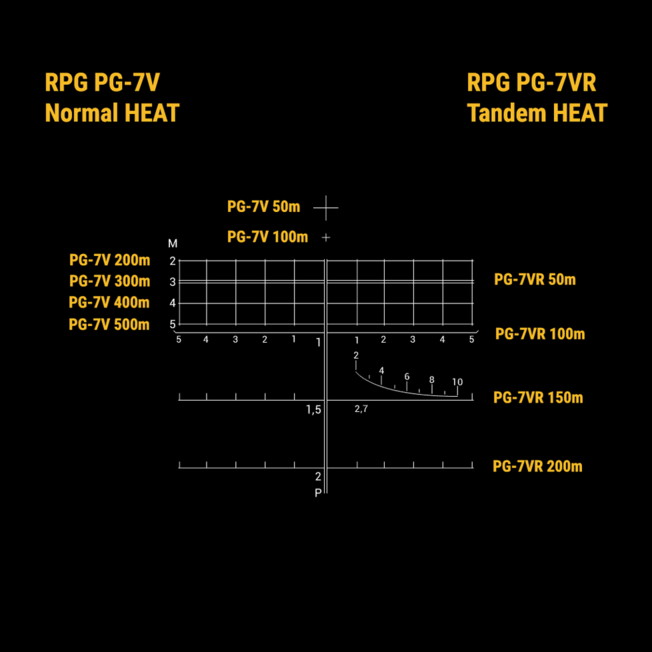