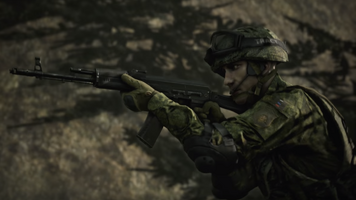 The Rifleman (Fighter for the Insurgents faction) is one of the Kits available in Squad. Each faction has their own version, equipped with a standard weapon common to its army. The rifleman is unique in that it is the only kit that comes with an Ammo bag.

The Riflemen kit is intended to give all-purpose support to a squad. The Rifleman is the backbone of any squad and is generally the most effective anti-infantry role in head-on engagements. New players should play as the rifleman to learn the basics of Squad game-play before moving on to more advanced roles.

Each faction's rifleman has multiple kit load-outs to choose from. Certain kits require a minimum number of squad members and a limited number of certain kits can be claimed by a single squad. See each faction's respective Wiki page for more information on kit restrictions as well as the Kit Role Selection page.

Rifleman kits include the most optics of any role, which allows the rifleman to fire at targets from a distance more effectively. Current Rifleman optics are the ACOG (US Army, British Army), SUSAT (British Army) and 1P78 (Russian Ground Forces, Irregular Militia, and Insurgents). Each rifleman kit is equipped with an Entrenching tool, one or two hand-grenades, at least two smoke grenades, and often times deployable sandbags.

With the introduction of persistent ammo, the Rifleman has also taken on the critical role of resupplying their fellow soldiers on the field with [Ammo bag| Ammo bags]. Persistent ammo means that when players respawn at a forward operating base or rally point, the ammo they died with is the ammo they spawn with (you always spawn with a minimum of a few magazines and two bandages). With the introduction of this mechanic, all Rifleman kits now include an Ammo bag. Although ammo is not as readily available prior to the introduction of persistent ammo, all kits can now quickly resupply anywhere on the field with the help of a rifleman.