The SPG-9 "Kopye" is a deployable weapon and a technical-mounted weapon available in Squad.

The SPG-9 is a manually breech loaded smoothbore recoilless rifle. It was designed by Silin & Alekseev in the late 1950s and adopted by the Soviet Army in 1962 to replace the B-10 recoilless rifle. The Soviet Army usually makes the SPG-9 the main armament of its BMP-1 mechanized infantry combat vehicles. Today, many Asian and European countries that had connections to the Soviet Union, as well as non-state and terrorist organizations, have the SPG-9 in their arsenal. 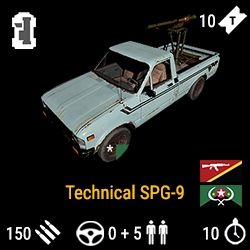 A Technical with a SPG-9 recoilless rifle.