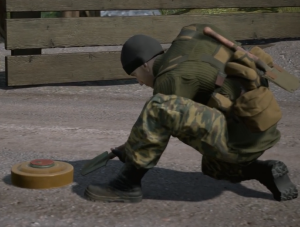 An Irregular Militia Sapper burying an Anti-Tank Mine with a MPL-50 E-Tool.

The Sapper is a kit available only to Rebel factions: the Insurgents and Militia forces.

Sapper kits are limited to 4 per team and is available to squads with 3 or more players.

A Sapper can have up to 10 anti tank mines deployed at any time, up to 5 decoys deployed at any time and 5 large IEDs on the map at a time. Attempting to place more than 10 mines will block the placement and a warning message appears: "Unable to place this tracked deployable, too many already placed?". Placing more than 5 IEDs will remove the oldest from the world. When you have placed a mine or IED you can dig it further into the ground to help conceal it, or leave it in plain sight to attempt to spook and funnel enemies into your other explosives or ambushes. This also means that your enemies can dig them up and thus neutralize them.