The squad vehicle claiming system in its first iteration will function primarily as a way to strengthen the role of the Squad Leader (SL) and eliminate the ability of players to take a vehicle without any responsibility for its usage. The system is entirely passive but also considered an advanced system. Only a Squad Leader can interact with and be notified as to the claim states.

Every player may request approval for a vehicle, however only a Squad Leader can approve a claim on a vehicle.

There are two ways the Squad Leader can claim a vehicle for his squad:

There are restrictions on how many vehicles a squad can claim at any given time (number of available vehicle claim slots).

If you attempt to enter a vehicle but can't get in, you will get one of several messages depending on the vehicle's current claim condition. Only the SL sees some of these messages.

Active VS Passive claims and how it affects your Squad.[edit | edit source] 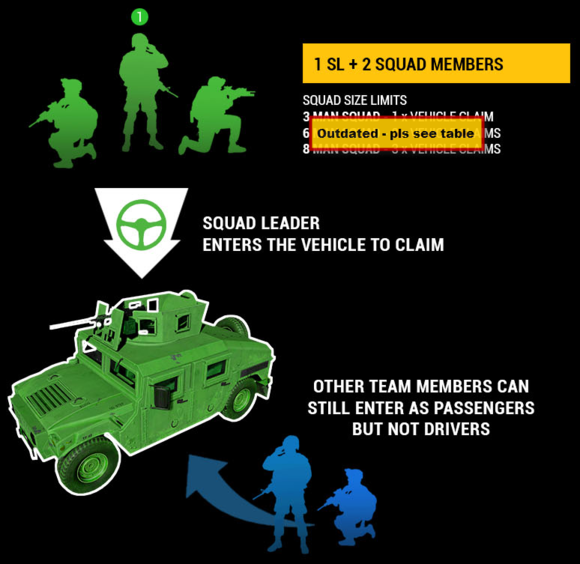 Active Claims always give you complete control over the vehicle seats and the driver position. Players not in your squad cannot enter the driver seat of your actively claimed vehicle (but they can enter the other seats). In order to maintain an active claim you must have a squad member somewhere in the vehicle. Any Squad member may also bump a friendly from an occupied seat by switching to that seat. (via the F1 to F12 keys)

Passive Claims are maintained even when the vehicle is not manned. Your Squad members can enter and exit the vehicle freely and the driver seat will still remain locked to the owning Squad. However, a passive vehicle can be claimed by another Squad Leader provided he has the ability to do so.

There may be a good reason to want to unclaim a vehicle and we are providing a number of methods to do that. 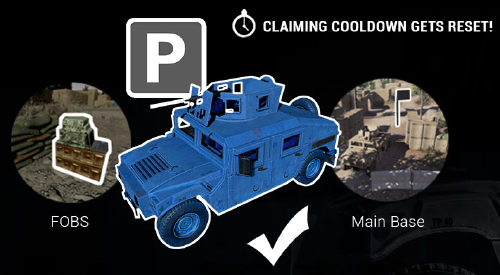 When you drop off your vehicle at a friendly FOB or main, this will reset your squad's claim timer and you can claim another vehicle.

Here are some messages relating to dropping off your vehicle you will encounter.